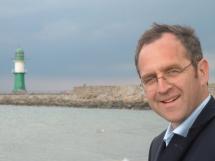 He was a long-standing MP in the German Bundestag (1998-2007), Deputy Chairman of the Green Group and Minister for Environment and European Affairs in the Free Hanseatic City of Bremen (2007-2011). Prior to his years in parliament and government Reinhard worked at the Wuppertal Institute for Climate, Environment and Energy, where he inter alia headed the Institute´s research group "Sustainable Germany".

He has strongly influenced the European and German sustainability debate by his books "Klimapolitik" (1997), "Zukunftsfähiges Deutschland" (1995, with Wolfgang Sachs et al.), “Greening the North: A Post-Industrial Blueprint for Environment and Equity” (1997, with Wolfgang Sachs et al.), "Die Zukunft der Infrastrukturen" (2005), "Abschied vom Wachstumszwang" (2010) and “The Good Society without Growth. Why Green Growth is not Enough” (2013).
He presently works on the relationship between money and nature and the "Post Growth Economy".